"TE VAKA BEATS Vol 2" is 13 tracks of pure percussion power. This is the second album written by Te Vaka's master percussionist - Matatia Foai and produced by Opetaia Foai. "Te Vaka Beats Vol.2 " is a logdrum/percussion and chant style album which has gone places logdrums have probably not gone before. Drummers and dancers will find many exciting and challenging beats for choreography.|

Mastered at "The Bakery" in LA by grammy award winning mastering engineer, Eric Boulanger the log and skin drums are sounding richer than ever.

Plus - This is the first Te Vaka album available as a high-quality download (Apple digital Master) from itunes. It will also be available for download and streaming on all the usual services.

A limited number of autographed copies are available for pre-order until the 13th June.
13th June is the release date!

A brief trip to New Zealand this month saw 4 very rare and unsurprisingly, sold out, concerts from Te Vaka. It was a unique and powerful collaboration between Opetaia Foa'i, Te Vaka and 3 different New Zealand Orchestras (Dunedin Symphony Orchestra, Christchurch Symphony Orchestra and Orchestra Wellington), resulting in the live experience: "Songs of Moana". Having many of the same voices and musicians found on the movie's soundtrack, and supported by the power of 60-something-piece orchestras, the show was an undeniable hit among adults and children alike.

"Every single item was stirring, effective, and excellently executed, holding the attention of and entertaining all in the audience, young and old...." "...It’s fair to say that Songs of Moana was a huge success..." - Ihlara McIndo, The Wave

"In the case of Moana, the music's sheer musicality and character carries it safely through to the other side, especially when it is performed with high spirited verve by a group which has established itself as one of today's leading musical voices of the Pacific." - Christopher Moore, The Press

"The area in front of the stage was soon swarming with children dancing and singing their hearts out, and the rest of the audience were captivated by the band’s superb renditions of these well-known songs." - Mike Crowl, Otago Daily Times

It has been a great year for "Lakalaka" so far, currently a finalist in the ISC "World Music" category and nominated in 3 Pacific Music Awards Categories: Best Pacific Music Video (directed by Olivia Foa'i), Best Pacific Song and Best Pacific Language (Awards show to be held May 24th). In addition, our manager Julie Foa'i is nominated once again at the Music Manager's Forum this year in 2 categories this time, "International Achievement" and "Manager of the Year".

Our very own Olivia Foa'i released her first solo R&B/Pop single - "City Got Your Name on It" watch the music video!

"Moana: The Songs" for "Best Compilation Soundtrack for Visual Media,"

Up against Guardians of the Galaxy Vol. 2 and Trolls, Moana    (music co-written by Opetaia Foa'i and Lin-Manual Miranda and scored by Mark Mancina) takes Top Soundtrack in the 2017 American Music Awards!

After a powerful opening performance of "We Know the Way" and "Tulou Tagaloa", Opetaia received the International Achievement Award at this years VNZMAs. The other recipient of this recognition was Lorde.

Walt Disney Records is set to release Te Vaka Greatest Hits, which features 10 songs culled from the group's 8 albums, plus a new previously unreleased track, "Lakalaka." The music video for "Lakalaka" will be released on the band's YouTube channel HERE on August 11. The digital album will be available on August 18. The physical CD will be available on October 6 and can be pre-ordered HERE.

Te Vaka, a unique 11-piece group, has enchanted the world with its music, costume and dance of the South Pacific for more than two decades. Combining the timeless roots of Polynesian music with contemporary influences and dance, audiences are taken on a journey into the Pacific Islands, into the heart of Polynesia.

Opetaia Foa'i, the founder and lead singer of Te Vaka, is a multi award-winning songwriter, celebrated for his dedication to telling the stories of the South Pacific.

Foa'i was part of the diverse and dynamic team behind Disney's "Moana" inspired music, which also included Tony-, Emmy- and Grammy-winning songwriter/composer Lin-Manuel Miranda and three-time Grammy-winning composer Mark Mancina ("Speed," "Tarzan" and the Oscar-winning "Training Day"). In addition to co-writing several songs for the film and soundtrack, the score also featured contributions from Te Vaka's singers and log drummers.

The "Moana" soundtrack has spent 23 weeks in the Top 10 on the Billboard 200 chart and has remained on that chart for all 35 weeks of its release.

Olivia Foa'i, daughter of Opetaia, wins her first award for Tulou Tagaloa, the opening track she performs on the Disney Feature film "Moana". When Opetaia and Olivia Foai flew to New Zealand to attend the Pacific Music awards they had no idea of what they were about to witness as the opening number paid tribute to Opetaia's achievements with a spectacular and moving performance by the   "Saintz up performing arts trust" of many of the songs he had written for "Moana". The Te Vaka performers, who had originally sung the songs on the movie, along with Opetaia seated in the front row of the Vodafone event centre, were filled with emotion as they watched the young performers deliver the songs.

Julie Foai was the winner of the "International Achievement" award for 2017. The MMF Music Managers awards night was held at the Spark Arena in Auckland and acknowledged and awarded Managers of successful New Zealand artists.

Many thanks to Universal Music New Zealand for nominating Te Vaka members for the Moana Soundtrack album in the Pacific Music Awards. The finalists were announced last night and as well as Olivia, include Opetaia Foai for "We know the way" (Best Pacific Song) and Vai Mahina for "Innocent Warrior" (Best Pacific Language). The awards night will we held in Auckland on the 1st of June.

Julie Foai, Te Vaka Manager,  is a finalist for "International Achievement" Winners announced on the 10th of May.

The Moana Premiere at the El Capitan theater in Hollywood was spectacular in every way. Opetaia and Te Vaka joined Dwayne "The Rock" Johnson, Lin-Manuel Miranda, Mark Mancina, Auli'i Cravalho. the film makers, drectors and many more on a night that show cased the South Pacific culture and music.

Te Vaka flys to the Goldcoast for a one off performance at the International Movie convention held at Jupiters Casino and Theatre in the Gold Coast.

The Te Vaka singers from 1994 to present time arrived in LA on the 20th of August to add the magic Te Vaka sound to the songs and score of the upcoming Moana movie. The experience for the band and the Disney music team was nothing short of  incredible to read more click here

For more than two decades Te Vaka has occupied a central space in Pacific music and dance, under the inspired leadership of Foa'i. The group has toured the world and performed at important global occasions including America’s Cup events in Auckland, the Commonwealth games in Melbourne, the Rugby World Cup in Paris and the Olympic Games in Beijing.

Te Vaka is a regular visitor to the Vodafone Pacific Music Awards podium having won numerous accolades over the years. The group’s songwriter and lead vocalist Opetaia Foa’i was noticeably missing from the awards ceremony but for good reason; he is currently writing the soundtrack for the upcoming Disney film Moana.
Read more

Moana: The Kiwi musician behind the next Disney blockbuster

Te Vaka - we are family 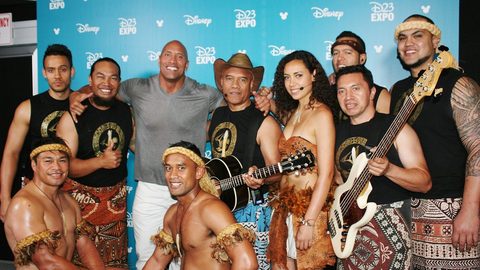 Te Vaka with Dwayne 'The Rock' Johnson, who will star in Disney's 'Moana'. Photo / Facebook

A New Zealand Pacific band has been chosen to lend their voices to Disney's next big movie - Moana.

Te Vaka is a group of musicians and dancers from various Pacific Island backgrounds based in New Zealand.

Their unique music - a blend of traditional Island and contemporary tunes - has taken them around the world and they have a huge following around the Pacific region.

Led by composer and lead singer Opetaia Foa'i, the group will perform on the Moana soundtrack; for which Foa'i has been chosen to be one of its song writers alongside award-winning composers Lin-Manuel Miranda and Mark Mancina, who worked on the Tarzan and The Lion King soundtracks.

The announcement came over the weekend at Disney's D23 Expo in the US, where Te Vaka was invited to perform one of the film's key songs: We Know The Way.

Dwayne "The Rock" Johnson - who is the voice behind one of the main characters in the film, Maui - introduced Te Vaka as "aiga" (Samoan for family) before they took to the stage.

Speaking to the crowd, Johnson, who is half Samoan on his mother's side, said: "I am so excited to be with you here today to talk a little bit about Maui and our incredible story about Moana....Samoa is in my blood and to tell a story inspired by the South Pacific is truly a great honour."

Speaking to the Herald from the US yesterday, Foa'i said they were shocked when approached by Disney two years ago.

"They went searching for a song writer from the Pacific and [my wife] Julie noticed that somebody had ordered everything on our site and then she noticed it said Disney at the bottom of the email.

"Then they brought me over here, so they could meet me...They thought they were checking me out, but I was checking them out. I didn't want to be involved with a movie that's going to make our culture look silly.

"I sit in on meetings with every top director in Disney and I speak my mind - and they listen. These people really care and they really want to present respectfully the culture of the South Pacific. I tell you, this movie is going to be something very special."

Foa'i travelled with some of the film's producers and directors to New Zealand and Samoa for research purposes and included an undercover visit to Auckland's Pasifika Festival last year.

The highly anticipated film, which is due out next year in November, follows a young girl named Moana Waialiki who travels the seas to fulfil her ancestors' unfinished quest. Along the way she meets demi-god Maui, who helps her along the way.

New Zealand already has a connection to the movie in Kiwi filmmaker Taika Waititi, who is behind the film's script.